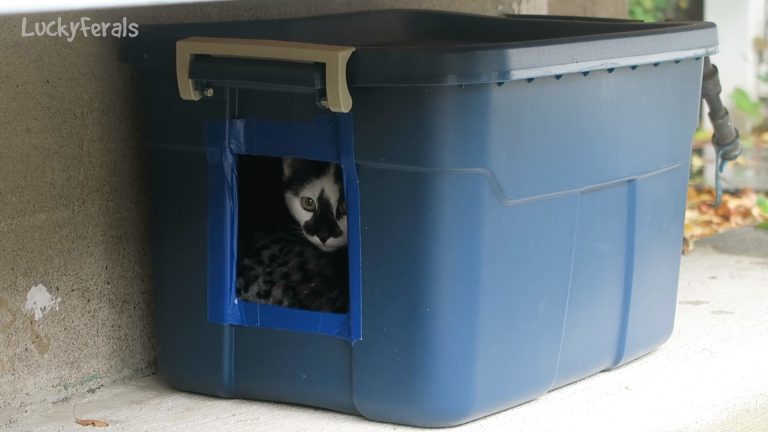 There are a variety of different ways to get a feral cat to use a cat shelter. What works for each cat and each feral cat shelter may be different and much will depend on the situation, circumstances, and the level of interaction that already exists between the cat and humans. Here are 10 ways that I’ve gotten feral cats to use shelters that I have created for them in my yard.

2. Make sure the cat shelter has more than one door.
Most feral cats will not use a shelter that only has one door. It makes them feel trapped. They need to have an escape route at all times. If a predator approaches one entrance, they can make their escape out of the other entrance. Preferably, the doors should be on opposite sides of the shelter or far enough apart that if a predator did try to get in one door, the cat could safely get out the other.

3. Make sure the doors to the shelter are fully open.
Cats who have never used a shelter before don’t understand swinging flaps, or that they can push through a curtain to get inside of a shelter. To first get a cat to use a shelter, make sure the doors are completely open and free of any obstructions so the cats can clearly see that they can go through the door to get in and also get out. Once cats are used to using a shelter, then flaps or curtains can be added. They really like flaps made out of clear material, like a shower curtain liner, so they can see in and out.

4. Make sure the doors are big enough for a cat to fit through.
A good size for a cat door is about 5 inches square. If it’s too small, a cat can’t easily fit through it and that might be preventing them from using the shelter. If the door is too large, it can invite too many larger critters like raccoons. I have seen possums and skunks check out cat shelters but they usually smell the scent of the cats and stay away.

5. Lure them in with a toy.
This works if you have some level of interaction with the cat but doesn’t work if the cat won’t go near you. Get one of those toys on a string on a stick and lure the cat close to the shelter. Once the cat is near the shelter, swing the toy through the door of the cat shelter and try to get the cat to follow it. They usually will chase it into the shelter and then realize how warm and cozy it is in there. I also like to leave cat toys in the shelters so the cats have something to play with while they’re in them. It’s a little added incentive for the cats.

6. Put the shelter where cats already hang out.
Pay attention to where cats already spend time and try to put a shelter there if possible. I noticed that the cats in my yard liked to hang out in the little alcove under my house so that it where I put shelters for them. I figured that if they liked to hang out there when the weather was nice, they would also like to hang out there when the weather wasn’t so nice and they would be happy to have warm little rooms to curl up in. Out of all of the shelters in my yard, they tend to prefer the ones in the alcove.

7. Change the location of the shelter.
Sometimes cats won’t use a shelter because of where it is located. For some reason, they might not feel safe in a particular location and sometimes moving the shelter over a few feet will make a big difference in getting cats to use a shelter. Try to vary the location of the shelter every few days until you see or notice a cat using it. I had a nice shelter made out of a plastic tub in one corner of my patio and cats would never use it. I moved it over about 6 feet and then I saw it being used.

8. Understand that when the weather is nice, cats would rather sleep outside somewhere other than in a shelter.
Cats only use shelters when it’s raining, snowing, or when it’s really cold outside. While it’s good to have shelters set up year round for the cats, they most likely will not use them unless the weather is bad or it’s really cold out. They’re much happier sleeping on patio furniture, under shrubs and bushes, or even under parked cars. When it’s raining, or the temperature drops, they are much more likely to use the shelters. If you put a shelter out and notice a cat is not using it, it could be that the weather is too nice.

9. Make sure the shelter is not close to food and there is no smell of food in and near the shelter.
Cats are smart animals. When living in nature, they bathe themselves immediately after eating a meal to get rid of any scent of food that may linger on their fur. They do this so they don’t attract any predators to themselves. If they don’t want the smell of food on themselves, they definitely don’t want the smell of food in, on, or around their shelter because they know it would not be safe. Make sure shelters are about 8 – 10 feet away from a food source and do not place food bowls inside or directly outside of the shelter. It’s best to place food in a sheltered area away from the cat shelters.

10. Set up a motion activated wireless security camera.
While this won’t directly get a cat to use a shelter, it can help you figure out if a cat is using a shelter or not. If you have the ability to set up a wireless security camera pointing at the shelter, you can see if and when a cat is using it. Sometimes I have no idea if a cat is using a shelter, but when I check the security footage, I can clearly see that it was being used at hours I would never see it being used, like in the middle of the night. I’ve found that cats often use a shelter for several hours at a time throughout the night and day and leave often to eat, roam, hunt, lay in the sun, etc.

These are my Top 10 ways to get a feral cat to use a shelter. If you have other ways that work for you, please leave them in a comment below. I would love to learn about them.

Little Eva is the 6th cat recovering from spay and

20 days into her spay surgery recovery and so much

Queen Stella loves to take a cat nap in her royal

The day after Little Eva's spay surgery is feature

Ringo continues to recover from his neuter surgery

This is how my cat gives me the once over. #boo #b